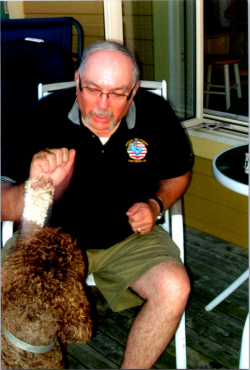 David spent a 25 year career with the Canadian Armed Forces mostly serving in the Royal Canadian Navy as a Master Seaman and logistics specialist. He also spent a career in fire safety as a fire safety inspector and fire marshal in Annapolis, Maryland as well as in Nova Scotia in the New Glasgow and Pictou area. David was a man of character as well as a very private person. In earlier years, he hosted many international exchange students and did a lot of volunteering for cultural and foreign exchange programs. He was known as an unofficial ambassador to Canada. David was forever showcasing Canada and was told many times he was too much of a Canadian. He was also a member of the Royal Canadian Legion Branch #40 in St. George, NB. David was also very proud of his service dog, Marco. Both he and Marco spent many hours visiting nursing homes, palliative care patients as well as students who may have been suffering from stress. He will be sadly missed by his family and community.

Arrangements in the care of the St. George Funeral Home (755-3533) 26 Portage Street, St. George, NB. In keeping with David’s wishes, there will be no visitation or formal service. In David's memory, donations to the Charlotte County SPCA, Fundy Bay Fire Department or a charity of the donor’s choice would be appreciated by the family. Online donations and condolences may be placed at www.stgeorgefh.ca