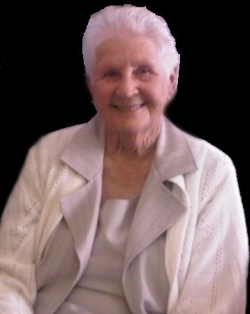 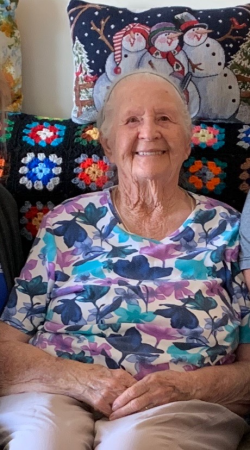 The passing of Norva Hatt, formerly of Pennfield NB and St. George NB and wife of the late Donald Hatt, occurred at the Passamaquoddy Lodge, St. Andrews NB on January 16, 2023 in her 101st year. Born on February 20, 1922, she was a daughter of the late Vernard and Winnifred (Kavanaugh) Noddin. A loving mother, grandmother, great-grandmother and great-great-grandmother, Norva is survived by her daughter: Barbara Connell of St. George NB; grandchildren: Paul (Jackie) Hatt of Halifax NS, Cindy (Dan) Breen of New Hampshire, Lisa (Randy) Garnett and Jonathan (Lacey) Connell both of Alberta; six great-grandchildren; 5 great-great-grandchildren; several nieces, nephews and cousins. In addition to her parents and husband, Norva was predeceased by son: Donald Edward "Eddie" Hatt; daughter in law: Carol Louise (Scott) Hatt; twin brother: Norval Noddin; brother: Roy Noddin; and sister: Leota Armstrong. Norva was the last surviving member of her immediate family.

Norva was a lifelong resident of Pennfield NB where she was a long-time member of the Pennfield Baptist Church, and she was also a former member of the Fundy Tide Seniors Club. Norva will be remembered as a very kind and loving person who enjoyed sharing all she had with others and taking care of others in need. She was an avid knitter and will be remembered for her many gifts of mittens, socks and other goodies that she gave out to others. Norva enjoyed celebrating her birthdays and on her 100th birthday, her and her family celebrated in grass skirts and doing the hula and she truly wanted nothing more on her birthday than her family and friends donating to the local food bank in her honor. She was a resident of Brunswick Court in St. George where she was kindly known as the social director. She will be sadly missed by her family, her family at Brunswick Court and all who knew her.

The funeral service for Norva will be live streamed and can be viewed by logging on to www.stgeorgefh.ca and clicking on Norva's obituary.