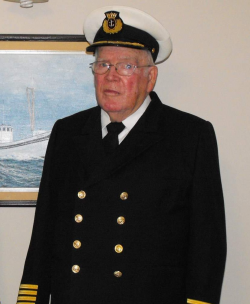 The passing of Captain Fraser Derald Shepherd, loving husband of Lillian May (Guptill) Shepherd occurred at the Grand Manan Nursing Home, Grand Manan NB on January 10, 2023. Born on Wood Island NB on November 10, 1930, he was a son of the late Hughitson and Madeline (Green) Shepherd. A loving husband, father, grandfather, great-grandfather and brother, in addition to his wife, Lillian, Fraser is survived by his children: Anzonette (Barry) Urquhart, Capt. V. Derald (Simone) Shepherd, Elliot Shepherd and Wilfred (Ginette) Shepherd all of Grand Manan NB; 12 grandchildren; 20 great-grandchildren; one brother: Wendall Shepherd; many nieces, nephews and cousins. Besides his parents, Fraser was predeceased by his grandson: Corporal Brandon Shepherd; brothers: Allison and Murray; and sisters: Jean, Audrey, Christine, Bernice and Pat.

At the age of 14 Fraser went to work on the Manning scow hauling lumber from mills on the Fundy coast. Next, he went to sea on oil tankers anywhere from Cuba to Montreal carrying fuel or molasses. Then he worked on many fishing boats until he bought the Shirley and Russell and started fishing and towing oil in a dracone. Then came the Fundy Bay which was written up in the National Fishermen's Magazine as the largest at that time. In 1965 he had the Anderel built and ran his freight and towing service until replaced by barges. This is when he went to work for Coastal Transport as Mate and quickly stepped up to Captain until retirement. Outside of work his interests were in hunting, trapping and all things Wood Island.

Arrangements in the care of the St. George Funeral Home (755-3533) 26 Portage Street, St. George NB. Resting at the Community Life Church, Grand Harbour NB with visiting on Saturday beginning at 12:00 noon until the service begins at 1:30 pm with Rev. Karl Ingersoll officiating. Interment will take place in the Maple Grove Cemetery in the Spring. In Fraser’s memory, donations to the Grand Manan Nursing Home or to a charity of the donor’s choice would be appreciated by the family.