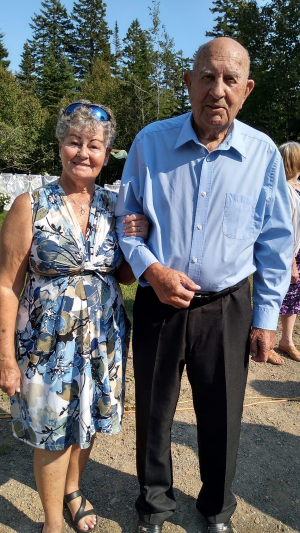 The passing of Dale Randolph Shaw Sr, of Utopia, New Brunswick, beloved husband of Crystal (Buchanan) Shaw, occurred at the Saint John Regional Hospital on December 29, 2022. Born at Oakville, New Brunswick on April 20, 1938, he was a son of the late Harold and Alma (Delong) Shaw.

Prior to his retirement, Dale came to the St. George area in the late 50s and bought his first business, BA Service Station in Utopia. He then went and worked for Connors Brothers in Blacks Harbour and served as Constable on the police force. Dale eventually left the police force to manage the garage at Connors Brothers. His management roll expanded from not only operating the garage, but to the warehouse and trucking division. During the 1980s, he became president of Blacks Harbour Transfer.

Dale was always community minded. He served as a long time member of the Blacks Harbour Fire Department and became chief in 1979 until 1986. Some of the attributes he brought to the fire department as chief were an addition to the fire station, pagers and a communication system as well as a campaign to raise money for the Jaws of Life, badly needed extraction equipment for the area. Dale also created a proper chain of command structure.

He had a huge involvement in hockey in Blacks Harbour, both with the minor hockey association where he served as an executive member and coached. Dale was always the go-to-guy in the minor hockey association for any and all transportation needs. He also was a manager for several years for the Blacks Harbour Silver King Organization. Dale also was instrumental in the formation of the Fundy League, a successful in-house hockey league out of the Blacks Harbour arena for several years where he served as President.

He was a life time member of the PC Party of New Brunswick, which he was truly proud to be a member of and served in various offices within the party.

Last but certainly not least, Dale was a family man who loved caring for his wife, children and lived for his grandchildren, who he was very proud of. In quiet times, he could be seen sitting on his deck at the lake. He also looked forward to hunting season every year. He will be sadly missed by all who knew him.

Arrangements in the care of the St. George Funeral Home (755-3533) 26 Portage Street, St. George NB. There will be no visitation or funeral service. In Dale's memory, donations to a charity of the donor's choice would be appreciated by the family