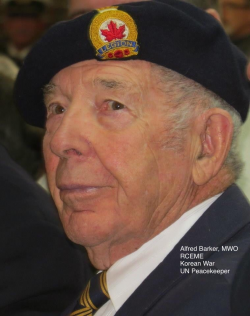 Surrounded by his loving family, our hero passed quietly to join mom on December 5, 2022.

Born in Middleton, NS on December 11, 1929 to Walter and Mary (Hampton), who immigrated to Nova Scotia in the early 1900’s from England. Melvern Square was their home for many years, then settled in Granville Ferry. Dad joined the Canadian Army in 1951 as a craftsman, moving up to Master Warrant Officer and was awarded the Canadian Forces Decoration & Bar.  Served in the Korean War with peacekeeping tours in Germany, Cyprus and Egypt until his retirement from the military in 1974. In 1959, as a soldier, fishing at Soldier Rip of Wedgeport, NS, caught a 497 lb tuna by Rod and Reel, the first Nova Scotian to do so since Alfred Trask competition.

Upon retiring from the Canadian Forces, managed Brunswick Petroleum Transport for 16 years until his official retirement in 1989. Dad filled many roles throughout his lifetime along with being a father, and included Past Master of St. George Masonic Lodge # 12 F & AM, member of Royal Arch Masons, Knights of the Order of the Temple, Luxor Noble of the Mystic Shrine, Past Worthy Patron of Granite Chapter OES # 15, Honorary Life member of the St. George Curling Club, Life member and Past President of the Royal Canadian Legion Branch # 40 and was awarded the Legion’s highest award, the Meritorious Service Medal, Chapter Member of the Luxor Flag Unit, Past President and Past Captain of the unit for many years.

Dad enjoyed curling, with his team winning the Provincial Senior Legion Curling Championship 1986. Time spent at their camp with family and friends, on the Magaguadavic River was precious. He and mom loved to go for long drives around Charlotte County and down to Oven Head, looking for any sign of wildlife or someone to stop and "shoot the breeze" with.  Dad also spent a lot of time at Gene Hoffman’s camp on the Dufour Road and we’re sure there are many stories to be heard but we’ve been told what happens at the camp, stays at the camp.

In Dad's memory, donations can be made to the poppy fund for the St. George Legion, Branch # 40 or St. George Animal Shelter.

The service for Al will be live streamed and can be viewed by logging on to www.stgeorgefh.ca and clicking on Al's obituary.