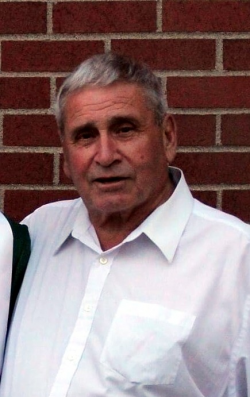 The passing of Edward Jean Comeau, husband of the late Donna Maxine (Moses) Comeau occurred unexpectedly at his residence in St. Stephen NB on November 27, 2022. Born in Concession NS on September 28, 1943, he was a son of the late Neil J. and Hilda M. (Walsh) Comeau. A loving father, grandfather, great-grandfather and brother, Eddie is survived by one son: Shawn (Diane) Comeau; one daughter: Heather (Peter) Jones all of St. Stephen NB; his grandchildren: Zack (Karah) Jones and Noah Jones (Devyn), Brieanna Comeau, Mattison Comeau and Gabriel Comeau; his great-grandchildren: Blakely and Everly; his brother: Walter (Wanda) Comeau of Concession NS; sisters: Rose (Grant) Welsman of Middle Sackville NS, Tina (Allan) Muise of Concession NS; Karen (Paul) McCauley of Mayflower NS and Irene (Ben) Marquis of Stoke PQ, as well as several nieces, nephews and cousins. In addition to his parents and wife, Eddie was predeceased by one son: Arden Comeau, grandson: Riley Comeau; sister: Elise IsBell; and by one sister in infancy, Elise.

Prior to his retirement, Eddie came to Blacks Harbour in the early 1960's to work at Connor's Brothers where he later became a machinist. In 1973, he went to work for Lake Utopia Paper where he worked for 26 years as a millwright until his retirement in 1999. Eddie also worked as a funeral assistant at St. George Funeral Home for a number of years as well as a long time area agent for Smet Monuments, two firms which he was proud to be associated with. He was community minded to say the least, as he was a former member of the Blacks Harbour Fire Department as well as a volunteer Ambulance Driver. Eddie was a member of the Stella Maris Catholic Church in Blacks Harbour where he was very active for a number years on church council and was also the chairman of the cemetery committee. He will be fondly remembered for being behind many projects at the church, such as the annual Church Fair and the Acquisition of Stella Maris Hall. He was a proud member of the Knights of Columbus #11569 for many years and was the first Grand Knight in that Chapter and also was a 4th Degree Grand Knight.  Eddie truly was a social butterfly who made friends and had conversations wherever he went. He could often be found at Tim Horton's in St. Stephen and St. George catching up on local news with the guys. Above all,  Eddie's biggest passion was his family and spending time with them. He will be sadly missed by his family, community and all who knew him.

Arrangements in the care of the St. George Funeral Home (755-3533) 26 Portage Street, St. George NB. Resting at St. George Funeral Home with visiting on Wednesday from 2-4 and 6-8 pm. Mass of Christian Burial will be celebrated from the Stella Maris Catholic Church, Blacks Harbour NB on Thursday at 12:00 noon. Interment will be held at a later date in the parish cemetery. In Eddie's memory, donations to a charity of the donor's choice would be appreciated by the family.