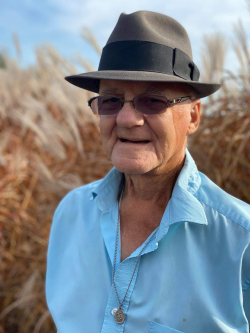 It is with great sadness that the family of the late Mr. Leon Joseph Babineau, beloved husband of Margo (Porter) Babineau, announce his passing away, peacefully with his family at his side at his residence on November 23, 2022. Born at Newcastle NB on November 21, 1945, he was a son of the late Luke and Margaret (Bourque) Babineau.

Prior to his period of failing health, Leon worked 20 years at Acadia Seaplants at Pennfield NB.

Prior to that he worked number of years in the aquaculture industry as night watchman at various sites.

Leon loved music and love playing guitar, and frequented the local jam sessions such as Sundays at Stella Maris Hall. He especially had a passion for bluegrass music and was a member of the New Brunswick Bluegrass Association. He also had another passion close to his heart, classic and vintage automobiles, both he and his classic black mustang pink ford fairlane belonged to the Valley Cruisers Car Club.

A kind fellow, he also loved the company of friends and family. He will be sadly missed by his family, friends and all who knew him.

The family would like to sincerely thank the New Brunswick Extra Murel of St. George for their kind and compassionate care shown to Leon and his family during his illness.

Resting at the St. George Funeral Home & Crematorium from where the service will be held on Monday at 2pm with Rev. Reg Ward officiating.  Interment in the Pennfield Rural Cemetery in the spring. Visiting at the funeral home on Sunday from 2- 4 and 6-8pm. In Leon's memory, donations to the Charlotte County Cancer Society or a charity of the donors choice would be appreciated by the family.