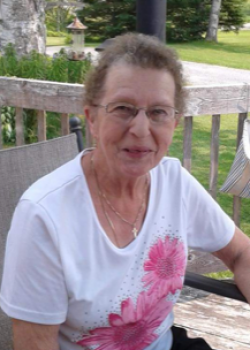 The passing of Marjorie Inez (Brown) Savoie, wife of the late Anthony Joseph Savoie occurred peacefully at her home on October 12, 2022. Born in St. George, NB on May 28, 1934, the same day of the birth of the Dion Quintuplets,  she was a daughter of the late John Frederick (Jack) and Mary Agnes (Henry) Brown. Marjorie is survived by her daughter: Mary (Gerald) Scammell of St. George, NB; son: Ken (Beth) Savoie of Tecumseh, ON; grandchildren: Jeff  (Maryanne) Scammell, Jared Savoie, Adam Savoie and Brooke Savoie; great-grandchildren: Maria, Monica and Liam Scammell; sisters: Mary Benoit of St. George, NB and Marie Pawlyk of Burlington, ON and several nieces, nephews and cousins. In addition to her parents and husband, she was predeceased by her son: Tony Savoie; grandson: Shawn Scammell; sisters: Betty Fraser and Shirley McDow and brothers: Leonard and Vance Brown.

Prior to her retirement, Marjorie was a teacher who taught school in Back Bay for 6 years where she said it was her best teaching years. She also taught in St. George for a year and a half as well as her lengthy 25 year career teaching for the Catholic School Association in Windsor, ON where she also took night classes and summer school to obtain her degree and religious specialist certificate. She was in the first graduating class of ECRS where she was on the organizing committee for reunions for many years. Marjorie was always very involved in her community and spent many years with the Royal Canadian Legion Branch #40 where she served on the executive. She was also part of the Legion Auxiliary where she served as president, on the kitchen committee and was Chairman of the Poppy Fund for many years which kept her busy from September to November. During her time with the Legion, she also prepared many meals and handed out many bursaries.

Marjorie also enjoyed sports especially hockey and curling and was a member of the St. George Curling Club for several years. In her youth, she also enjoyed playing baseball and badminton. She was very fond of gardening and knitting and she was known for her well made socks, mittens, slippers and dish cloths. She was also a regular bingo player at the Legion. Marjorie taught Sunday School and belonged to various committees such as the Charlotte County Retired Teachers Association and she organized the very first Brown Family Reunion.

Arrangements in the care of the St. George Funeral Home & Crematorium, 26 Portage Street (755-3533) St. George NB. Although there is no visitation at the Funeral Home, a Mass of Christian Burial will be celebrated at St. George`s Catholic Church on Monday October 17, 2022 at 11:00am with Father Rolando Suplido officiating. In Marjorie`s memory, donations to a charity of donor`s choice would be appreciated by the family. Online donations and condolences may be placed at www.stgeorgefh.ca