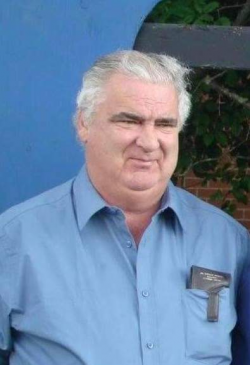 The passing of Roger Alan Lord of Fairhaven NB occurred unexpectedly at his residence on October 1, 2022. Born in St. Stephen NB on December 28, 1956,  he was a son of the late George Franklin and Betty Marguerite (Keating) Lord.

A loving father, grandfather and brother, Roger is survived by his sons: Alison and Kevin, as well as their mother Virginia Lord, all of Beaver Harbour NB; his granddaughters: Stephanie (Tyler), Chastity, Kiera and Savannah; his brothers: David (Leah) and Darrell (Loretta) Lord both of Fairhaven NB; his sisters: Joyce Wilcox (John Guiver) of Alberta and Doreen (Gordon) Richardson of St. Andrews NB; special friend: Glenda Firlotte; as well as several nieces, nephews and cousins. In addition to his parents, he was predeceased by his brothers: Gary and Richard "Dickie".

Roger was a well known resident of Deer Island. He worked for several years at Connors Brothers in Fairhaven until its closure. He then went to work for Paturel Sea Foods where he worked as a forklift operator and a truck driver for a number of years until the plant was destroyed by fire. He still trucked lobsters from the island following the fire until his retirement.    Roger was a volunteer for several years with the Deer Island Fire Department, where he once served as Deputy Chief and was a long time volunteer with the Deer Island Ambulance Service.

Roger loved history, music and playing guitar. He loved his Island and its people. He always loved being out and about, making friends and having conversation with anybody who would take the time. He will be sadly missed by his family and all who knew him.

Resting at the Fairhaven Baptist Church where visiting will be held on Wednesday from 2-4 pm. A graveside service will be held at Fairhaven Community Cemetery at Calder's Head on Thursday at 3:00 pm with Rev. Kevin Richardson officiating. In Roger's memory, donations to the Heart and Stroke Foundation of New Brunswick or to a charity of the donor's choice would be appreciated by the family.