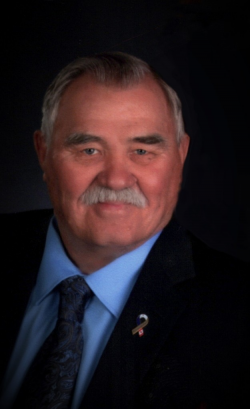 Born in Benito MB on October 19,1939, he was the son of the late Karp and Luiba (Karaluk) Balasiuk - loving and Christian Ukrainian parents that immigrated to Canada. Wally was a loving, father, grandfather, brother, uncle, friend, devoted Christian and a community man. Wally will be deeply missed by his daughter: Roberta Pettersson (Bjorn Pettersson)of St. George NB; his grandsons: James Gravelle of Toronto ON and William Pettersson of Sweden; one brother: Ronald Balasiuk (Patricia); sisters: Frances Stoltz and her late husband Gerald, Vera Harden and her late husband Clarence, Ruth Birch and her late husband Ted and Mary Kimpel all of ON; his sister in-law: Barbara (Armstrong) Ginivan and her late husband Caleb of Franklin MA; Also Roberta's sister: Sonya VanTassel (Jay) of ON; and his close family friends: Lil and Vaughn Boyle of Breadalbane NB. Wally was predeceased by his parents, wife and one daughter: Maria Gravelle (John); and brothers: Samuel (Pauline) and Peter (Jacqueline) both of ON; brother-in-law Burton (Royce) Armstrong; and sister-in-law Jeanne (Armstrong) Young (Allen) of St. George NB.

The family is too large to mention everyone, but none are forgotten and all are loved. Each of Wally’s nieces and nephews held a special place in his heart and each could surely share of their special memory of their Uncle Walt.

A well-known figure in the local community, Wally sat on numerous boards and committees. He previous sat as the chair of the board of Atlantic Baptist Senior Citizens' Homes Inc, Deacon at the St. George Baptist Church and was involved with the St George and Area Food Bank garden that he started, sowed, harvested and maintained many years and there are numerous other organizations including his commitment to the Conservative Party. Wally played professional football with the East York Argos in 1964 and the CFL for the Toronto Argonauts from 1965 to 1970.  His final year in 1971 with the Montreal Alouettes before retiring due to injury. Wally, Jackie and Maria moved to New Brunswick in 1978. He was the president and one of the founders of Jail Island Salmon until retirement. Wally enjoyed fishing, traveling and watching birds and deer in the marsh. In later years and travels, he reunited with his Ukrainian roots and family remaining in the Ukraine.

A friendly man and gentle giant, Wally had the ability to make you a friend after the first conversation you had with him. He always went out of his way to greet those he met on the street and always had a smile and laugh to help lift everyone's spirits. In his spare time he enjoyed a round of golf with his buddies. He loved showing his magic coin trick to all the children and was a long-time member of the St. George Baptist church and his devotion and love for his church, his community and his family will be greatly missed.

Arrangements in the care of the St. George Funeral Home (755-3533), St. George NB. A funeral service will be held at the St. George Baptist Church, St. George NB on Saturday at 11:00 am with Rev. Darren Millett from Nova Scotia officiating, followed by the interment at the St. George Rural Cemetery. Visiting at the church will take place Saturday morning beginning at 10:00 am until the beginning of the service, and a reception with light snacks, refreshments and slide show will follow in the lower section of the Church. The service will be live streamed and can be viewed by logging onto https://www.youtube.com/channel/UCl37xhVzpwGJ3EuJqv-pFWg/videos

In Wally's memory, donations to the St. George Baptist Church, the St. George Food Bank or Canada-Ukraine Foundation would be greatly appreciated by the family.