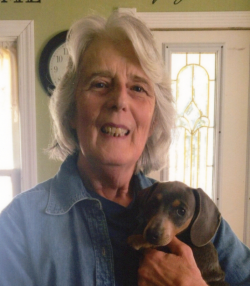 At the Charlotte County Hospital, St. Stephen NB on August 25, 2022, Mrs. Shirley Yvonne (Leslie) Lord of Lords Cove NB passed away. Born on Deer Island NB on December 1, 1945, she was a daughter of the late Maxwell and Ina Leslie.

A loving mother, grandmother and sister, she is survived by her sons: Barry (Irene) Lord, Timothy (Rhonda Barteau), Neil (Nathalie Poirier), Larry (Debbie) and Mark (Sarah); her daughter: Jessica (David) Wilcox; 14 grandchildren; several great grandchildren; her sister: Linda (Stuart) Camic; as well as several nieces, nephews and cousins. In addition to her parents, she was predeceased by her brother: Earle; her sister: Zelda Smith; and a grandson: Tony.

Prior to her retirement, Shirley worked for a number of years for Paturel. She enjoyed the simple things in life such as the occasional drive to Deer Island Point and to watch the boats coming and going in the cove. Her favorite times were spent with her family especially her grandchildren. She was a member of Lords Cove Church of Christ.

There will be no visiting but a graveside service will be held at Fairhaven Community Cemetery at Calder's Head on Sunday at 2:00 pm with Rev. Richard Hovey officiating. In Shirley's memory, donations to a charity of the donor's choice would be appreciated by the family.