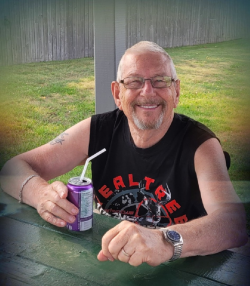 Peacefully at the Saint John Regional Hospital, Saint John NB, on July 11, 2022, with his beloved wife Cynthia and his family by his side, Mr. William "Allison" Darke passed away and joined his Lord and Saviour. Born at St. Stephen NB on June 20, 1943, he was a son of the late William and Alice (Leland) Darke. A loving husband, step father, chosen father, brother and friend, in addition to his beloved Cynthia, he is survived by three chosen children including David Thomas; step daughter: Heidi (Dwayne) Ward of Birch Ridge NB; chosen and step grandchildren: Kristal McCoy (Chris White) and Jacquelynn McCoy (Andrew), Bohdan, Skyler and Johan; chosen and step great-grandchildren: Denica and Brody; one sister: Elizabeth "Beth" Darke of Lambertville NB; chosen father-in-law: Keith Stuart of Lambertville NB; several nieces, nephews and cousins. Besides his parents; he was predceased by his first wife, Mae Darke; one brother Gregg; one sister: Dawna; and by one step-son: Daniel Bertaux.

Prior to his retirement, Allison served with the US Navy for 20 years, retiring as Chief Petty Officer. Allison and Cynthia spent most of their time together traveling. They traveled extensively through the United States and Canada seeing every province, territory and state with the exception of Newfoundland and Hawaii. Allison also took up whitewater rafting, which he truly enjoyed. He was a long time member of the Lamberts Cove Baptist Church and was a well known social butterfly who spoke to anyone he met on his journey.

As keeping with Allison's wishes, there will be no visiting. A graveside service will be held on Friday at 2:00 pm at the Fairhaven Community Cemetery, Calder's Head, with Rev. Kevin Richardson officiating. A reception will follow at Lambert Cove Baptist Church. In Allison's memory, donations to a charity of the donor's choice would be appreciated by the family.