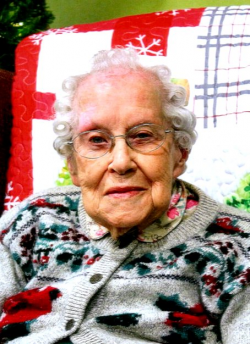 Born in North Head NB on June 23, 1925 she was a daughter of the late Cecil and Mary Leonia (Flagg) Bagley.

Prior to her retirement, Myrtle worked at several occupations including a laborer at Connors Brothers factory, operating a taxi service as well as a laundry service throughout the island. Myrtle also loved quilting and was known to have quilted over 700 quilts which were gifted to many people on the island. She will be sadly missed by her family and nursing home family as well as all who knew her.

The family would also wish to extend their heartfelt thanks to the Management and staff of the Grand Manan Nursing Home for their kind compassionate care shown to Myrtle and her family during her stay with them. It will  never be forgotten.

Service will be held from the Seal Cove Baptist Church on Tuesday at 1 pm with Rev. Peter Smith officiating followed by interment in the Hillside Cemetery. Visiting at the church from 12 noon until time of service. In Myrtle's memory, donations to a charity of the donors choice would be appreciated by the family. Online donations and condolences may be placed at www.stgeorgefh.ca