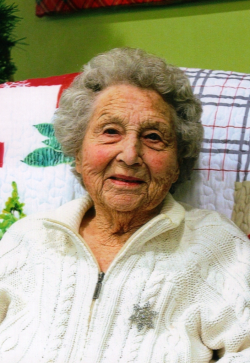 The passing of Martha "Jeanne" Anderson, wife of the late Gerald W. Anderson formerly of Grand Manan NB occurred at the Grand Manan Nursing Home, Grand Manan NB on June 8, 2022 with her son and daughter at her bedside. Born on July 22, 1929, she was a daughter of the late Charles "Steadman" and Arla (Lambert) Fountain. A loving mother, grandmother and great-grandmother, Jeanne is survived by her children: Sybil Joan Wilmot (Fred) of Saint John NB and John Anderson (Charlotte McAdam) of St. Andrews NB; her grandchildren: Christopher Simms (Michelle), Meaghan Harrigan and Signe Anderson; great-grandchildren: Cassidy Simms, Maria Simms, Maeve Harrigan and Nolan Harrigan; and by several nieces, nephews and cousins. In addition to her parents and husband, Jeanne was predeceased by her sister: Abby Allen; and nephew: Teddy Allen.

Jeanne spent her early years growing up in Lord's Cove on Deer Island until taking up permanent residence on Grand Manan in 1949. After attending Mount Allison University and Normal School, she pursued a lifelong career as a teacher on Grand Manan. She loved teaching and was fondly remembered by her students and fellow teachers for her dedication long after her retirement. While attending Mount Allison University, Jeanne also studied music, more specifically voice, and she had a beautiful soprano voice that was often heard at Seal Cove Baptist Church or in her classroom where she taught her students some of her favourite songs including, "Waltzing Matilda." In her spare time, Jeanne loved being surrounded by her family and friends and enjoyed reading a good book or listening to music. She had a great sense of humor and always being a teacher, she often told her children that they never went on summer vacation but instead were on Research Development, looking for the perfect lobster trap and Labrador Retriever.

The family wishes to extend a gracious thank you to the staff at the Grand Manan Nursing Home for the respect, compassion, love and care they provided to Jeanne over the years.

Arrangements in the care of the St. George Funeral Home (755-3533) 26 Portage Street, St. George NB. There will be no visiting. A memorial service will be held on Grand Manan on a date and time to be announced. In lieu of flowers, donations in Jeanne's memory to the NB Heart & Stroke Foundation or to a Grand Manan High School Scholarship Fund would be appreciated by the family.