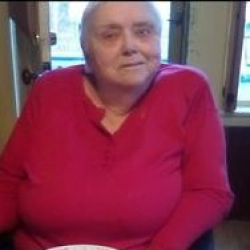 The passing of Maude Maria Doughty, formerly of Northwest Harbour NB, occurred on May 30, 2022 at the Fundy Nursing Home, Blacks Harbour NB. Born on Deer Island NB on February 8, 1936, she was a daughter of the late J. Marshall and Lelia (Richardson) Doughty. Maude is survived by one son: James "Jay" Doughty (Ashley Trimble) of Midland ON; one daughter: Rebekah Hall (Donny) of St. George NB; grandchildren: David, Prescott, Marissa, Aiden, Ember and Heath; great-grandchildren: Edmund and Emmitt; siblings: Lori Bertaux (Roy) of Clementsport NS and James Leslie (Marilyn) of Deer Island NB; and several nieces, nephews and cousins. In addition to her parents, Maude was predeceased by her companion and partner of 44 years, Helen Colwell; and by one brother in infancy: Manning.

Maude worked as an RNA in both Saint John and Quebec before moving back to Deer Island in 1975 with Helen, where they owned and operated the Ship Ahoy Take Out and Handicraft Shop. Ten years later she adopted her children and in 1989 retired to spend her time painting, knitting, crocheting, travelling with her family and watching the ships come into her beloved harbour.

Arrangements in the care of the St. George Funeral Home (755-3533) 26 Portage Street, St. George NB. There will be no visiting. A service will be held at the Mount Hope Cemetery, Richardson NB on Tuesday at 2:00 pm with Conrad Cline officiating. In Maude's memory, donations to your local SPCA or to Charlotte County Cancer would be appreciated by the family.