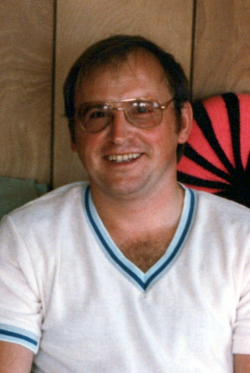 The passing of Allison Russell Hawkins, husband of Audrey R. (Goodrich) Hawkins, occurred unexpectedly at their residence in Beaver Harbour NB on May 14, 2022. Born in Blacks Harbour NB on August 31, 1950, he was a son of the late Stephen Adolphus and Muriel (Stuart) Hawkins. A loving husband, father, grandfather, brother, brother-in-law and friend, in addition to his wife Audrey, Allison is survived by his two daughters: Amanda Hawkins (Adrian) and Laureen Hawkins (Paul) both of Campbell River BC; his grandchildren: Adrianna, Josh, Ilanna and Nya; two brothers: Clarence Hawkins of Nova Scotia and Wade Hawkins of Beaver Harbour NB; four sisters: Phyllis Justason, Barbara Sloan, Carolanne Cooke (Joe) and Alice Kaglar (Stanley) all of Beaver Harbour NB; his brother-in-law: Doug Goodrich (Irene) of Lepreau NB and his son, Brent Goodrich (Melanie) of St. George and their three children; and several nieces, nephews and cousins. Besides his parents, he was predeceased by two brothers: Terry and Perry Hawkins; and by two sisters: Shirley Fraser and Verna Bell.

Prior to retirement Allison worked his whole working life with Connors Brothers in Blacks Harbour. After his retirement he enjoyed the peace and quiet of staying home. He loved gardening, and when able, enjoyed traveling with Audrey, having been to British Columbia and Florida and stopping at many places in between.

Arrangements in the care of the St. George Funeral Home (755-3533) 26 Portage Street, St. George NB. Resting at the Beaver Harbour Baptist Church, Beaver Harbour NB with visiting on Thursday from 2-4 and 6-8 pm. The service will be held from the church on Friday at 2:00 pm with Rev. Bill Lea officiating followed by the interment in the Harbour View Cemetery, Beaver Harbour NB. In Allison's memory, donations to NB Heart & Stroke Foundation or to Charlotte County Cancer would be appreciated by the family.