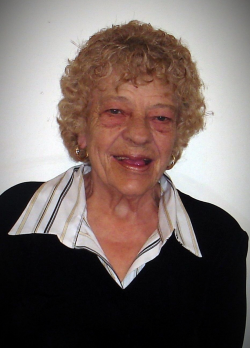 The passing of Janet Mary (Godin) Blanchard, wife of the late Arsene Joseph Blanchard formerly of Blacks Harbour NB, occurred at the Fundy Nursing Home, Blacks Harbour NB on May 10, 2022. Born in Rivière-à-la-Truite NB on July 14, 1937, she was a daughter of the late Joseph and Marie (Gauvin) Godin. A loving mother, grandmother, great-grandmother and sister, Janet is survived by two sons: Joseph Blanchard (Denise) of Blacks Harbour NB and Johnny Blanchard (Julie) of Saint John NB; three daughters: Elizabeth Blanchard, Mary Scott (Jimmy) and Claudette McGarrigle (Billy) all of Blacks Harbour NB; 13 grandchildren; 16 great-grandchildren; two brothers: Louis Godin (Anne) of St. Stephen NB and Medrick Godin (Irma) of Harvey Station NB; and by several nieces, nephews and cousins. In addition to her parents and husband, Janet was predeceased by two children in infancy: Gerard and Gerald; and by one sister: Pauline Blanchard.

Prior to retirement, Janet worked for Connors Brothers in Blacks Harbour for many years. In her free time Janet loved playing cards, especially Queen of Spades. She enjoyed baking and when able loved to be in the company of her grandchildren who meant the world to her. Janet loved music and could often be found sitting at her kitchen table listening to the classics like Johnny Cash and old gospel music. She loved catching up with her family on the phone and had no problem talking to her sister-in-law Irma for hours on end. She worked hard to raise her family and her love and devotion will be greatly missed by all who knew her.

The family would like to thank the staff at the Fundy Nursing Home for their care and compassion shown towards Janet over the last few years. Your hard work and dedication does not go unnoticed.

Arrangements in the care of the St. George Funeral Home (755-3533) 26 Portage Street, St. George NB. Resting at the funeral home with visiting on Sunday from 2-4 and 6-8 pm. Mass of Christian Burial will be celebrated from the Stella Maris Catholic Church, Blacks Harbour NB on Monday at 11:00 am with Father Roland Suplido officiating followed by the interment in the parish cemetery. In Janet's memory, donations to the Alzheimer's Society, Diabetes Association or to a charity of the donor's choice would be appreciated by the family.