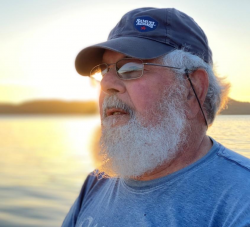 "When the golden sun is setting,

And your mind from care is free,

When of others you are thinking,

Will you sometimes think of me?"

It was with sadness we announce the passing of Cecil "Myer" Yanofsky of Lake Utopia, NB on April 12, 2022 at the age of 81. He was husband of 53 years to Sheila Jean (O’Neill) Yanofsky formerly from Blacks Harbour, NB. Myer passed away in Palliative Care with dignity at Bobby’s House of Greater Saint John. Born in Halifax, NS on January 27, 1941, he was the son of Isadore "Issie" and Golda "Goldie" (Glick) Yanofsky.

Myer, in addition to his wife Sheila, is survived by his children Adrian (Jennifer) of Eddington Maine, Elizabeth Davis (Chris) of Riverview NB and David (Melanie) of Calgary Alberta.

Grandfather, AKA "Grampy and "Kippur" to Leo and Ian, "Grampy" to Jaedon and Chloe and "Papa" to Gabe and Violet. Brother to Samuel J. Yanofsky of Halifax, NS.

Myer has a number of brother-in-laws, sister-in-laws, nieces, nephews and cousins in the local area and across Canada. Those being representative of the Yanofsky’s Cukiers, Cronin’s, O’Neill’s, Leavitt’s, Hennessey’s and the Likely’s.

Myer shared a special bond with his nephew Johnny O’Neill, his friend and fishing partner Andy Getchell both of Charlotte County NB and his life long dear friend and "Buddy" David L. Parsons of Sydney, NS. He will be deeply missed by all those mentioned.

In addition to his parents Myer was predeceased by his sister Laeah Cukier of Thornhill, ON and his infant granddaughter Charlotte Yanofsky.

Myer was born and educated in Halifax, NS where he began his career as a Laboratory Microbiology Technician at the Pathology Institute. In 1980 he and the family relocated to St. George, NB, he was employed in laboratory services with Connors Brothers Ltd. until his retirement.

Myer, a man of God was an active member of his church. He was a Lay Reader, in the music ministry, in Outreach Programs (ALPHA), visitations to seniors, and his fund raiser, "bottle collecting runs." He could be counted on to be present, be it Shrove Tuesday or any church supper, he could often be seen manning the dishwasher in clean up.

Myer absolutely loved living on Lake Utopia, be it fishing, raising fish in his pond, working on his property "for hours on end," the time spent with neighbours and his performing Karaoke and seeing himself as the cover for Louis Armstrong singing his "What a Wonderful World" which he took great pride to sing with and for his wife Sheila. Myer also loved taking his grandchildren on adventures, on foot, 4 wheeling, tubing on the lake and the many bonfires they shared he loved spending time with them.

Myer also enjoyed his time on the golf course, especially attending the golf tournament named in his honor, The Myer Yanofsky Challenge, at the Pine Hill Golf Course in Maine. In addition to golf and curling, he was an avid outdoorsman, an award-winning member of the New Brunswick Sport Fishing Association and NB Bass Tour and he wore his Championship Jacket with Pride. He was a proud representative of his sponsors "Smelly Jelly" "The Boston Beer Company" as well as a number of local businesses which he enjoyed contacting, "Are we on again for this year?" He was a hard man to say no to.

The family is especially appreciative to the "Palliative Care team" and all those who supported Myer in allowing him to remain in his own home as long as he could. Also, for the attentive and compassionate care he received, and the consideration and much support given to the family at Bobby’s House.

Arrangements in the care of the St. George Funeral Home, (755-3533) 26 Portage Street, St. George NB. In keeping with Myer's wishes there will be no visitation or funeral service at this time. In his memory, remembrances to Bobby's House of Greater Saint John, Eastern Charlotte Extra Mural Program (supporting palliative care patients and their families), The Cancer Society or a charity of the donor’s choice would be appreciated by the family.

Myer would be honored if friends and family remembered him for the good times they had together.