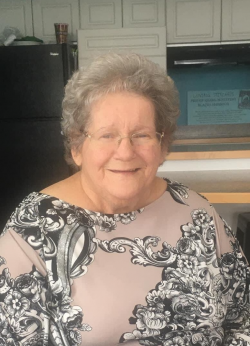 Prior to retirement, Emerise worked several jobs and eventually retired from Connor's Brothers in Blacks Harbour where she worked as a packer. She loved camping, clogging and playing Bingo. Emerise was truly a social butterfly who made friends wherever she went and she loved the extended family she made when she moved into Brunswick Court in St. George. Family was the most important thing in Emerise's life and she loved to be in the company of her grandchildren and great-grandchildren when able. Her love and devotion to her family will be greatly missed.

Arrangements in the care of the St. George Funeral Home (755-3533) 26 Portage Street, St. George NB. Resting at the funeral home with visiting on Tuesday from 2-4 and 6-8 pm. Memorial Mass of Christian Burial will be celebrated from St. George's Catholic Church on Wednesday at 11:00 am with Father Suresh Savariraj officiating followed by the interment in the parish cemetery. In Emerise's memory, donations to NB Heart & Stroke or to the Diabetes Association would be appreciated by the family.