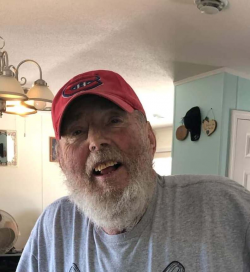 It is with heavy hearts that we announce the unexpected passing of Francis Dow Needle, husband of the late Sharon (Johnston) Needle of 52 years, he passed away peacefully at the Passamaquoddy Lodge, St. Andrews NB on March 13, 2022. Born in Hartland NB on July 16, 1942, he was a son of the late William and Rena (Roy) Needle.

Francis loved to work, some may say he was even a "Workaholic" from a very young age of working on the farm milking cows to Connors Brother's, Point Lepreau, construction and then clamming. Once retired he enjoyed going to Tim Horton's with his sidekick Susie (his dog) and listening to his old country music. Francis was a diehard Habs fan. He had such a great sense of humour and was very witty. Everyone enjoyed spending time with him as he brought so much joy being in his presence. He was a free spirit that wouldn't think twice about jumping in the car and driving to Ontario for a weekend. He just loved the outdoors, fishing, hunting, cutting wood and driving the back roads. Francis was a man that enjoyed good company and being around his family. Christmas was always a favorite holiday as all the family was together. Francis married the love of his life, Sharon, on July 4th 1964 and in earlier years he and his wife enjoyed their hobby farm. We'll surely miss and remember his great stories laughter. He was an amazing man who won't be forgotten.

Arrangements in the care of the St. George Funeral Home (755-3533) 26 Portage Street, St. George NB. There will be no services held at this time. In his memory, donations to a charity of the donor's choice would be appreciated by the family.