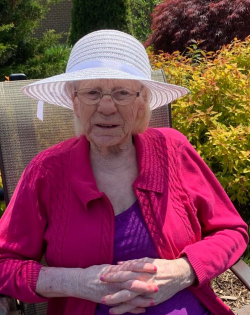 Prior to her retirement, Rita worked for 30 years for Connors Brothers. She was known by her family as a woman of simple pleasures who was loads of fun. She loved bingo and loved to dance and sing. During her stay at the Passamaquaddy Lodge, she embraced the change from the beginning, fitting right in and becoming a member of "the group" who done everything together. She will be remembered for ending each entertainment activity with her famous "Wig Wank Dance" Rita was known as a person who was fun to be around and will be sadly missed by her family and all who knew her.

Resting at Christ Church (Anglican) in Pennfield from where the service will be held on Wednesday at 2pm with Canon Caleb Twinamastiko officiating followed by interment in the church cemetery. Visiting at the church on Tuesday 2-4 and 6-8 pm. In Rita's memory, donations to the Charlotte County Cancer Society, Heart and Stroke foundation of New Brunswick or a charity of the donors choice would be appreciated by the family.