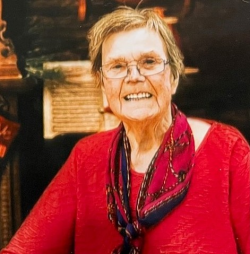 Prior to retirement, Edna was employed as a Nurse. In her younger years she enjoyed all kinds of crafts, and even learned to use a router, knitting machines and sergers. She enjoyed going for walks and cooking (or in particular, feeding people). You could always find a partially read book, and a knitting project in the works, right up to a few years ago. She lived in British Columbia until 2013, when she then decided to make New Brunswick her permanent home once again. She made many friends over the years both in BC and NB, and will be sadly missed by all.

A special thank you to her niece Rosslyn Hooper, who spent countless hours sitting with Edna, taking her shopping, to doctor's appointments and anywhere else she wanted to go. Also for being there for her during the pandemic, when visitors were few.

Arrangements in the care of the St. George Funeral Home (755-3533) 26 Portage Street, St. George NB. There will be no visiting or funeral service at this time. In Edna's memory, donations to a charity of the donor's choice would be greatly appreciated by the family.