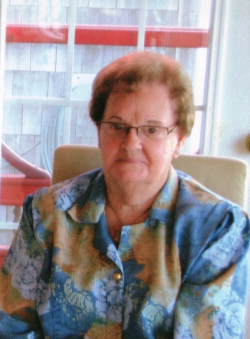 "If I didn't have you as a mom, I'd choose you as my bestfriend."

Eleanor Marie Green of Seal Cove, Grand Manan NB passed away peacefully at her daughters home in Grand Harbour NB with her daughter by her side on January 8, 2022. Born on Grand Manan NB on July 24, 1925, she was a daughter of the late William and Frances (Johnson) Hatt.

Eleanor was a resident of the Grand Manan Nursing Home, who went above and beyond during her stay there. She loved each and everyone who had her as a patient there.

Eleanor was very active in the church community. She first attended as a member of the North Head Baptist Church and then became a very active member in the Seal Cove Baptist Church where she put her heart into many church supper and functions. Her God was first and foremost in her life.

Throughout the years, Eleanor enjoyed curling from the time the Curling Club was founded until her late 70's when her health no longer allowed her to participate. She also was a star pitcher in the women's softball league, playing a few times a week after finishing her shift at the Connor's Brothers factory in Seal Cove. She then continues her love for sports by watching her grandchildren and great-grandchildren in many baseball and basketball games. It was her pride and joy to go catch a game while eating her favourite soft ice cream from Bernies. Her granddaughter, Richi, made sure Nan would get out to games and took her for drives almost nightly, all while her favourite Christian music was played. She would sing her heart out and her hands were always lifted high.

In addition to her parents, Eleanor was predeceased by her husband of 59 years, Theodore "Fisher" Greenl; granddaughters: Bridgette Russell and Destiny Green;

Arrangements in the care of the St. George Funeral Home (755-3533) 26 Portage Street, St. George NB. Due to current Covid-19 restrictions, services will be held for Eleanor in the spring. In lieu of flowers, donations to Charlotte County Cancer or to a charity of the donor's choice would be greatly appreciated by the family.