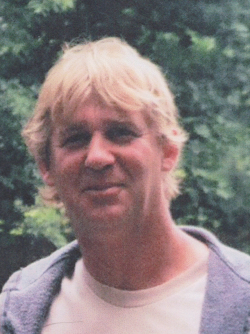 At the Charlotte County Hospital, St. Stephen NB on December 28, 2021, Mr. Brock Martin Rhynold, beloved husband to Gina Louise (Elliott) Rhynold of Pennfield NB. Born at Blacks Harbour NB on March 2, 1966, he was a son of the late Leo and Twilah (Bradford) Rhynold.

A loving husband, father and brother, Brock is survived by his wife Gina, his cherished daughters: Brittany Rhynold (Jesse Webb) of Fredericton NB and Tiffany Rhynold of St. George NB, his brother; Leigh Rhynold (Heather Langlais) of Oak Bay NB, sisters: Darlene Syrnyk of Montreal PQ and Stephanie Rose Oakville ON as well as several aunts, uncles, nieces, nephews and cousins. In addition to his parents, he was predeceased by his sister Tina Paul and his nephew Stephen Koteff.

Prior to Brock's illness, he began his employment career in the aquaculture industry both working on and managing fish farm sites for several years before moving to the electrical field. He then went to work for General Electric where part of his responsibilities was to set up and install such equipment as X-Ray equipment and MRI machines. Brock then went to work for NB Power as an installation superviser.

In recent years, Brock took up collecting such things as vinyl records as well as old pinball machines which he restored. Brock was also a homebody and family man, who was happiest when spending precious moments with his family as well as taking walks with his fur buddies. He will be sadly missed by all who knew him.

In keeping with Brocks wishes there will be no visiting or service at this time. In Brock's memory, donations to a charity of the donors choice would be appreciated by the family