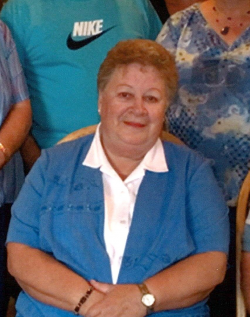 The passing of Helen (Howard) Chambers, wife and best friend of Richard Chambers, occurred at her home in St. George NB on December 22, 2021. Born in Florence, Cape Breton NS on May 5, 1938, she was the daughter of the late Thomas and Annie (Robinson) Howard.

Shortly after graduation Helen joined the Royal Canadian Air Force and became a medical assistant and was stationed at RCAF Base Cold Lake, Alberta where she met her husband Richard while he was a patient in the hospital. Together with Richard, they raised three children and lived on RCAF Bases across Canada for the next 23 years. After leaving the air force, they moved to Bridgewater NS and finally settled in St. George NB.

Helen through the years enjoyed many leisure activities; ceramics, knitting, travel, bingo and most of all, line dancing. She loved bluegrass music and belonged to a bluegrass association while in living Nova Scotia.

In addition to her parents, Helen was predeceased by 11 siblings.

In lieu of flowers, the family asks for donations to a charity of your choice or to the St. George Legion, Branch #40, of which Helen was a proud member.

Due to Covid 19 restrictions, a celebration of life will be held at a later date.

The family would like to express thanks to the St. George Extra Mural for their kindness and excellent care of Helen until the end.