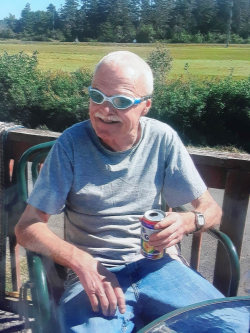 It is with great sadness that the family of Douglas Philip Worthen announce his sudden passing on November 30th, 2021 at the Saint John Regional Hospital, Saint John NB. He was the son of the late Sidney Worthen and Helen Worthen (Brown). Douglas passed away at the age of 65, just 4 days shy of his 66th birthday.

Douglas was known to most by his nickname Dougie. He owned an auto body shop and was known for his incredible body work. Dougie was quick witted and he always had a one liner to make anyone smile or get a chuckle out of them. He never missed a trouting season, it was something he looked forward to every year.

Douglas leaves behind one daughter, Deborah Dakin and three grandchildren, Alexa, Megan and Isaiah. Douglas will be missed by his 4 brothers; Larry, Norris (Lorraine), Kevin and Karl (Tammy), and three sisters; Linda (Michael) , Charlene (the late Jeffrey Jackson) & Karen . He will also be remembered by many nieces, nephews and friends.

The family would like to say a heartfelt thank you to the staff of the Grand Manan Hospital, Saint John Regional, and the paramedics for their care and efforts. Funeral arrangements will be announced at a later date.