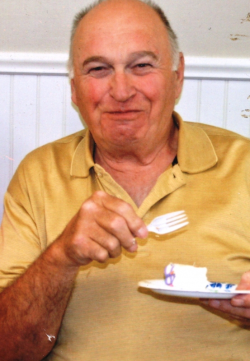 It is with heavy hearts we announce the passing of Francis Charles McRae at the Fundy Nursing Home in Blacks Harbour on November 30, 2021. Born in Bocabec, NB on July 13, 1936, he was the only son of the late Basil and Marjorie (Holt) McRae. A loving father and grandfather, he is survived by his daughters: Cynthia McRae of Pennfield and Andrea McRae Rogers (Dwayne Shanks) of Moncton, as well as his grandson, Jared McRae Rogers of Fredericton. Francis was predeceased by his wife Greta (Wright) McRae.

Although his immediate family was small, Francis touched the lives of many throughout his years. To Angela Coleman-Gray, he was "dad", to Shelbi Lee McLellan, he was "Grampie", and to Evelyn who passed before him, he was a very special friend.

Prior to his retirement, Francis worked as a diesel mechanic for Connors Brothers maintaining the fleet of fishing vessels. After that he worked in the machine shop making parts to keep the plant operating for nearly 20 years. His love for the sea and boats inspired him to build a replica of the Bluenose, The Canada 100, and his own fishing boat. He could often be found at Holts Point, or any wharf, just watching the boats and the sea. His other hobbies included oil painting and woodworking. He never did it for wealth, but simply for the joy that it brought him. In his younger years, he could be found under the hood of a car or even underneath it just to help out a friend. If someone was in need, Francis was there to lend a hand. He will be greatly missed by his family and all who knew him.

Resting at the St. George Funeral Home & Crematorium (755-3533) with visitation on Friday from 2-4 and 6-8pm. Service will be held at the funeral home chapel on Saturday at 2pm with Rev. Reg Ward officiating.

In Francis' memory, donations can be made to the NB Alzheimer's Society and the ALS Society of New Brunswick or a charity of donor's choice would be appreciated by the family.