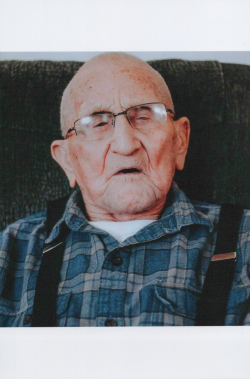 Peacefully at his residence on September 18, 2021, with his family at his side, Arnold Seymour Hawkins in his 111th year, husband of the late Vera A. (Morse) Hawkins, passed away at home in Beaver Harbour NB. Born at Beaver Harbour NB on January 30, 1911, he was a son of the late Almon and Lucy (Pond) Hawkins.

A loving father and grandfather, he is survived by his sons: Ronald (Audrey) Hawkins of Beaver Harbour NB and Wayne (Faith) Hawkins of Blacks Harbour NB, daughters: Belva McIntyre of St. Andrews NB, Anita (Gary) Frye of Quispamsis NB and Violet McKinley of Pennfield NB, 14 grandchildren, 27 great grandchildren and 7 great great grandchildren as well as several nieces, nephews and cousins. In addition to his parents and his wife Vera, he was predeceased by 8 siblings, which he was the oldest, one great grandson and son in laws; James McIntyre and Jamie McKinley. He was the last of his immediate family.

Long before his retirement, Arnold enrolled in business  college for half a year before he said to himself, "I could make more money digging clams than being a business man". So that's where he went, as well as on the water, making a living and raising his family, on the resource he claimed, (along with potatoes) was the key to his long life, fish, which he did for many years.

Arnold was a long time and well known member of his community, a community which was very special to him. Recently he held the honor of being the oldest Canadian born man, where on his 110th birthday, received over 6000 cards and well wishes from all over, an honor that he and his family were very proud of. He will be sadly missed by his family and all who knew him. The family would also like to thank the many wonderful caregivers who, with their dedicated, loving and compassionate care, made it possible for Arnold to remain in his home. They are forever grateful.

In keeping with his wishes, there will be no visiting. A private family service will be held at a later date. In Arnolds memory, donations to the Charlotte County Cancer Society would be appreciated by the family.