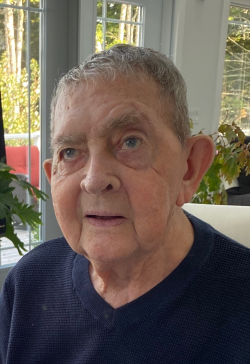 Prior to his retirement, Maurice worked several years for Gilco Bearings and Universal Sales. Maurice was particularly proud of both of his sons and his four grandchildren. They spent many memorable moments at Nana and Papa's house and "out the camp". Maurice was an avid outdoorsman who loved spending time in nature hunting and fishing, and was always ready to talk about "big one he shot or the size of the fish he landed". He enjoyed life to its fullest and was always the life of any social event.

The family would like to thank the management and staff of the Fundy Nursing Home in Blacks Harbour, NB for their kind, compassionate care shown to Maurice and his family during his stay with them.

By Maurice's request, there will be no visitation or formal service at this time. A private graveside service will be held at the St. George Rural Cemetery at a later date. In Maurice's memory, donations to the Charlotte County Dial A Ride, Charlotte County Cancer Society or a charity of the donor’s choice would be appreciated by the family. Arrangements in the care of the St. George Funeral Home and Crematorium (755-3533).