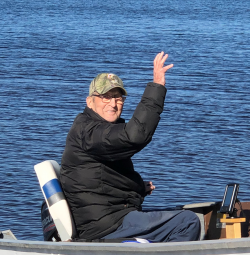 The passing of Carl Manson Cheney occurred  on September 2, 2021 at the  Charlotte County Hospital, St. Stephen NB. Born at Blacks Harbour NB on December 25, 1944, he was a son of the late Wilbert "Wib" And Anita "Pearl" (Hobbs) Cheney.

Prior to his retirement, Carl worked for several years at Connors Brothers, first on the water aboard The Connors Brothers and later on the carrier " Bernadine." He later joined the Construction and Wharf crew, finally with the Can and Cover division. Carl was an avid outdoorsman and following his retirement, he made the most of enjoying his favorite passions of hunting and fishing. He was always a sports fan and enjoyed baseball and hockey. In his younger years Carl played with the Tunaville Tigers of  the Fundy League in Blacks Harbour. Carl could always found at the arena in Blacks cheering on the kids especially his boys.

The family would like to share their utmost appreciation to Anita and the entire team of the Charlotte County Hospital Dialysis Unit for there kind, helpfullness  and compassionate care shown to Carl during his many dialysis treatments over the past years.

Resting at St. Marks Anglican Church, Main Street St. George NB  where the family will be receiving visitors on Monday from 2-4 and 6-8 pm. A Celebration of Carl's life  will be held on Tuesday, September 7 at 2pm with Rev. Mary Anne Langmaid officiating followed by interment in the Pennfield Rural Cemetery. Masked wearing is encouraged but not required for both the visiting and service.  In Carl's memory, donations to the Charlotte County Hospital Dialysis Unit or a charity of the donors choice would be appreciated by the family. Arrangements in the care of the St. George Funeral Home and Crematorium Limited, 26 Portage St. St. George NB.