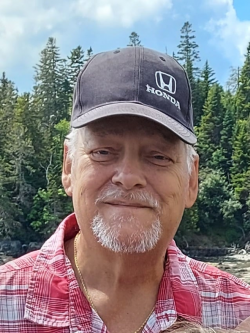 Dennis met the love of his life at a young age in Nova Scotia and they were married on September 8, 1978. A year later they visited Blacks Harbour for vacation and decided to make it their permanent home. The highlight of Dennis' life truly was his granddaughter Emily. He enjoyed taking her for treats, playing cards with her and spending as much time with her as he could.

Dennis worked for Connors Bros. where he was employed for 40 years as an Industrial Mechanic in the fish meal plant and only recently retired from there two years ago. He was a serving member of the Knights of Columbus, Branch #11569 who enjoyed tinkering in his yard and garden and going for drives. Dennis had a hobby of collecting pins and bottles. He enjoyed relaxing on his deck with Della, doing search word puzzles and spending time with his family and friends.

Arrangements in the care of the St. George Funeral Home (755-3533) 26 Portage Street, St. George NB. There will be no visiting. A Memorial Mass of Christian Burial will be celebrated from the Stella Maris Catholic Church, Blacks Harbour NB on Friday at 2:00 pm with Father Rolando Suplido officiating followed by the interment in the parish cemetery.  The family has requested that masks please be worn for the service inside the church. In Dennis's memory, donations to the NB Heart & Stroke Foundation would be appreciated by the family.

A special thanks to the nurses and staff of the Cardiac Unit and the SICU at the Saint John Regional Hospital. The compassion you have shown us will never be forgotten.