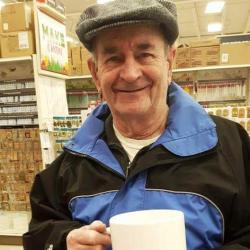 Prior to retirement, Guy worked between both Connor's Bros. and Keith's Building Supplies in Blacks Harbour for 60 years. Well known in the community, Guy sat on The Village of Blacks Harbour's council for 25 years and received recognition from the province for his dedication. He was active in community events and could often be found at the Brunswick Curling Club or the Arena in Blacks where he enjoyed watching the local kids play hockey. Guy was always willing to help others in need and that was shown with his service as a Paramedic for 25 years. An avid sports fan, he could often be found cheering on the Maple Leafs, even though his family often disagreed with him. Guy had a strong faith in the Lord and was a long time member of the Pentecostal Church in Blacks Harbour before his and Louise's move to Saint John. His sense of humor, love and devotion to his family will be sadly missed.

Arrangements in the care of the St. George Funeral Home (755-3533) 26 Portage Street, St. George NB. Resting at the Mission Point Church, 130 Mark Drive, Saint John NB with visiting on Wednesday from 1-2 pm. Following visitation, the funeral service will begin at 2:00 pm with Rev. Brent Carter officiating. Interment will be held in the Pennfield Rural Cemetery. The family has requested that those attending the funeral service please wear something Blue, as it was Guy's favourite color.

In Guy's memory, donations to the Alzheimer's Society would be appreciated by the family.