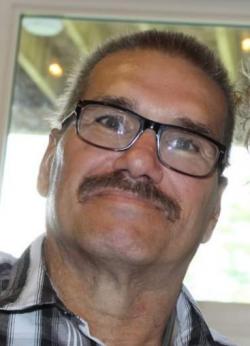 Died suddenly June 21, 2021 at the Saint John Regional Hospital. Darren was born in Blacks Harbour on June 11, 1965 to Royce and Mae (Patterson) Hanley. A loving husband to Stacy, devoted father to Dexter and awestruck grandfather to Odessa!

Prior to his sickness Darren owned and operated his own construction company. He worked many years side by side with his father also in construction. In his younger years he worked for Connors Bros and also a local lobster pound. Darren was happiest working on and around the water. He often stated that was what he missed most with being confined to a wheelchair.

Darren was more than his disability that people viewed for the last 12 years. First of all, he was a momma's boy and proud of it. He made the best of every day! He always had the most positive of attitude, turned every negative into a positive, would give the shirt off his back and often his last dollar to those in need. He truly had a heart of pure gold and lived a Christian life to the best of his ability. His best friend and full time companion was Scrappy, they were inseparable. Where Darren was, Scrappy was. When we asked him while he was in hospital what he missed most, he looked at us strange and said, "Scrappy!" One of his greatest joys in life was his special niece, Harley, he was so very thankful to be her uncle. But most of all, Darren considered his most important, true success in his life, was his son, Dexter. He worshipped the ground he walked on and was so proud to say he was his Dad!

To his family there will never be anyone as strong or courageous as him, he was a true inspiration! He will be missed greatly and remembered for the love and strength he showed us daily.

Special thank you to his Extra Mural nurses who treated him like family. He thought the world of them all, but Sherri Hoyt will always hold a special part of his wife's heart for the compassion and understanding she always held with Darren.

There will be no visiting. A celebration of life will be held from the Sea View Full Gospel Church, Back Bay NB on Thursday at 2:00 pm with Rev. Randy Crozier officiating and Rev. Gordon Cooke assisting. Due to limited seating for the service, those wishing to attend are asked to contact the Sea View Full Gospel Church at 755-3592 to register. In Darren's memory, donations to Charlotte County Cancer would be appreciated by the family.