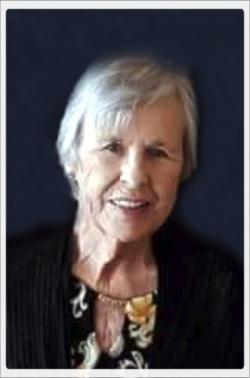 Carolyn was well-known for her adventurous spirit, her love of her family, and her great affection for dogs. She died peacefully at home due to renal failure on June 9th at her home in Mascarene, NB.

Carolyn fit a lot of living into her 79 years. She was a loving mother to Everett and Catherine and the perfect grandmother to 14-year-old Evan, enjoying many hours together with them in recent years.

She had many treasured family members and friends throughout the province who joined her on local ventures to dog shows, Scottish festivals, tubing down the Miramichi, picnics at Green's Point, drives for ice cream at Pete's, dinners on the Birches patio and takeout at Ossie’s.

She had a long and diverse career. After graduating from the Victorian Order of Nurses in Fredericton in 1964, she worked at the Victoria Public Hospital in Fredericton until the late 1960s, and then moved on to the Fundy Hospital in Blacks Harbour where she thoroughly enjoyed working with many wonderful colleagues and patients until early 1980s.

It was then that Carolyn and her husband Lloyd started Cooke Shellfish Ltd. Their work to grow their business took them throughout New England, to France and Belgium, and across Canada to trade shows. They were among the region’s first fish farmers, helping to build Charlotte County’s aquaculture industry. They bought and sold shellfish throughout Atlantic Canada and New England, processing clams, mussels, crabs, lobsters and periwinkles and farming sea trout. Together, they employed many St. George area residents and for many years they also operated a substantial shellfish business out of Stephenville, NL.

In the 2000s, Carolyn started traveling across Europe on her own, visiting England, France, Spain, Germany, Ireland and Scotland, her favourite, where she enjoyed learning about the strong Stewart family heritage. She also enjoyed solo travel to Monaco, Switzerland, Italy and Mexico. Another highlight of her travels was taking the Rocky Mountaineer train trip from BC to Alberta on her own. She spent her winters in Valrico, Florida from 1991 to 2013 where she entertained many family and friends, always ensuring they took a trip to Busch Gardens or Parkesdale for a strawberry shortcake.

Carolyn was an encyclopedia of dogs who loved every dog she met. Through her kennel, Everyn Kennels, she bred Scottish Terriers. She also showed dogs at professional dog shows. In recent years, she adopted two West Highland Terrier show dogs, who brought her much enjoyment and participated in many of her adventures all over the Maritime provinces.

Sincere thank you and gratitude to the incredibly wonderful and caring nurses in the Dialysis unit of the Charlotte County Hospital. Anita, Bonnie, Krista, Maryanne, Camilla and all of you have provided the most unbelievable care a family could ever imagine, consistently since she was under your care since 2013. To the nephrologist team in Saint John, Dr. Sohi, Dr. MacKinnon, Dr. Goguen – our sincere appreciation for always providing excellent care and guidance. And lastly, thank you to our local Extra Mural care for allowing us the final days together as a family in Carolyn’s paradise of home. It was the greatest gift of care.

Arrangements in the care of the St. George Funeral Home (755-3533) 26 Portage Street, St. George NB. Visitation will be held at the funeral home on Friday from 1-4 pm. A private family graveside service will be held at a later date. In lieu of flowers, donations to the Kidney Foundation of Canada or to a charity of the donor's choice would be appreciated by the family.