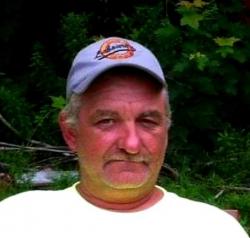 Daniel Gordon Russell of St. George NB, passed away peacefully at his residence on May 15, 2021 with his devoted and loving family at his side. Born in Blacks Harbour NB on August 11, 1967, he was a son of Pauline (Watson) Russell of Pennfield NB and the late Gary Russell. A loving partner, husband, son, father, grandfather, brother and uncle, Danny is survived by his longtime partner: Jackie Kofoed of St. George NB; his mother; Pauline of Pennfield, his children: Alisha Winters (Murray Wile) of Utopia NB and Nathalie Poirier (Neil Lord) of Back Bay NB; Jackie's children whom he thought of as his own: Zoe Kofoed (Ron Anderson) and Nick Kofoed (Danielle Arends) both of Toronto ON; his grandchildren: Shelby Wile, Ethan Wile, Carter Wile, Lilly Kofoed and Seraphina Kofoed; his siblings: Jeff Russell, Kimberley Russell (Mark Gaudett), Darren Russell (Gloria), Adam Russell and Chris Russell all of Pennfield NB, Betty Jo Belliveau (J P) of Metaghan NS and Marina Gallant (Leopold) of Utopia NB; many nieces, nephews, cousins as well as his ever remembered family on the McKay Loop Road. In addition to his father, Danny was predeceased by his loyal four legged companion, his dog: Woofy.

Prior to illness, Danny worked for the Labourers Union Local #900. A truly loving and devoted family man, Danny enjoyed nothing more than being with his family, especially his grandchildren. A jack of all trades and "Mr. Fix It" in the family, Danny enjoyed spending his free time working on cars, building random items and doing home renovations and repairs. The family would also like to thank the Charlotte County Extra Mural Nurses for their kind and compassionate care, second to none, given to Danny to allow for him to spend his final days surrounded by his family at home.

Arrangements in the care of the St. George Funeral Home (755-3533) 26 Portage Street, St. George NB. Resting at the Pentecostal Lighthouse Church, Blacks Harbour NB with visiting on Tuesday from 2-4 and 6-8 pm. Due to limited seating allowed under Covid 19 capacity and being a large family, a private family service will be held from the church on Wednesday at 2:00 pm with Rev. Wayne Munn officiating. Friends may join the family at the Pennfield Rural Cemetery for the interment. In Danny's memory, donations to Charlotte County Cancer would be appreciated by the family.