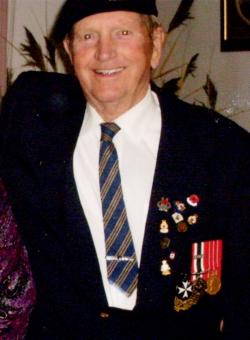 At the St. Joseph's Hospital C.A.M unit on April 13, 2021, Mr. Charles Adam Rogers, beloved husband to Lilian (Holland) Rogers of Seeleys Cove NB. Born at Pocologan NB on March 24, 1927, he was a son of the late William G. and Irene (Taylor) Rogers.

Prior to his retirement, Charlie began with serving a number of years with the Royal Canadian Army Infantry in Germany following the War as a peacekeeper. Following the war Charlie travelled throughout the country and worked many places doing maintenance work for various employers including maintenance supervisor for the town of Annapolis Royal NS and later close to home at the Pennfield Sawmill. He also worked as a self employed carpenter-maintenance person throughout the area as his "jack of all trades" talent made him very handy and available to his many friends and acquaintances needing service in one trade or another. He was always there to lend a helping hand to anyone in need or with a project.

Charlie also spent some time on the water as a fisherman, which he also enjoyed. Charlie spent many years involved with the Boy Scouts of Canada, an organization that was near to his heart. Camping and travelling were also favorite pastimes enjoyed by Charlie as he frequented many campgrounds throughout the years as well as his favorite spot in McAdam. He also enjoyed playing card attending music jams and even maintenance work were among his favorite hobbies he would enjoy.

Charlie was also a very active member of Christ Church (Anglican) in Pennfield where he held various positions including vestry and cemetery committee and along with his late companion Carrol McGarrigle completed or overseen many of the churches projects over the years. He also was a member and past president of the Royal Canadian Legion branch #40 in St. George and as well as Annapolis Royal NS. He will be sadly missed by his family, friends and all who knew him.

Resting at the St. George Funeral Home & Crematorium (755-3533) with visiting on Monday from 6-8 pm with Covid 19 protocols in effect. A private family service will be held from Christ Church (Anglican) in Pennfield NB followed by interment in the church cemetery at a later date. In Charlie's memory, donations to Charlotte County Cancer, The Alzheimer's Society or to a charity of the donor's choice would be appreciated by the family.