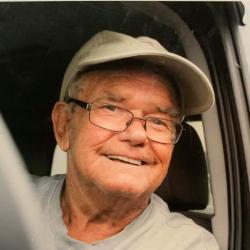 We are deeply saddened by the unexpected passing of Blayne Sterling Hanley on April 6th , 2021 at the Saint John Regional Hospital, Saint John NB.

Blayne was born in Back Bay NB on February 18th, 1945. He was the son of the late Hilton and Alberta (Hatt) Hanley.

Married for 56 years to his loving wife, Lorena (Hooper) Hanley, he was a dedicated and devoted father to Denise Ellsworth (David) and Annette Elsemore (Todd). But Blayne’s real pride and joy was being a papa to his grandchildren Marshall, Devin and Mackenzie.

Blayne was a very hard-working man and fortunate to sail on the Bay of Fundy where he provided for his family by scalloping, clamming, lobster fishing and tending herring weirs. He loved the ocean and was proud to be a fisherman. In younger years, Blayne was an avid hunter (even though his daughters refused to eat anything he brought home). And in later years, he loved spending time with his friends on the wharf and at Tim Hortons. He looked forward to this everyday and every night.

The family would like to extend a special thanks to Kim Glennie (his angel on earth) and to all the other extra mural nurses who cared for him.

Arrangements in the care of the St. George Funeral Home (755-3533) 26 Portage Street, St. George NB. Resting at the Sea View Full Gospel Church, Back Bay NB with visiting on Wednesday from 6-8 pm. The service will be held from the church on Thursday at 2:00 pm with Rev. Gordon Cooke officiating, followed by the interment in the St. George Rural Cemetery. Due to Covid-19 restrictions, seating for the funeral service will be limited and those wishing to attend are asked to call the funeral home at 755-3533 to reserve a seat.

In Blayne's memory, donations to the Back Bay Elementary School Home and School would be greatly appreciated by the family.