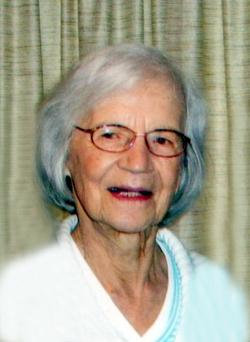 Mary "Ruby" Thorne passed away peacefully on Friday, April 2, 2021 at the Passamaquoddy Lodge in St. Andrews, NB. She was born on July 6, 1917 in Rhein, Saskatchewan to the late Peter and Irene Bodnaryk.

Ruby was a self-reliant and independent woman who lived a full life. She was a successful entrepreneur and a role model for the women of her time.  She loved to work and even at a young age was business minded.

In her younger years she enjoyed dancing and took lessons in tap, ballet, the highland fling and sword dancing. Going to the movies was another favourite past time and she would save to go weekly.

In 1940 she came East with her friend Mabel and worked at the Park Hotel (now St. Stephen’s University) in St. Stephen, NB. She then met her late husband Delbert Sr. and moved to St. George. There she worked at the local pharmacy, telephone office and Seymour McKay’s Store. In 1959, she owned and operated Ruby’s Restaurant for 10 years, located on Brunswick Street. No one around could top her cinnamon rolls, or pies and her sewing could rival that of many. In 1970, she opened St. George Fabrics and the Sears order office for 25 years.

In her later years, Ruby enjoyed gardening, spending time at New River Beach, bowling, playing bridge and travelling. She travelled throughout the world, with Fiji being her favourite. She encouraged her family to travel and always enjoyed hearing of their adventures.

Ruby was perseverant and was of the belief that if life knocks you down, you get right back up. She rejoiced in the success of her children and grandchildren and was fiercely proud of her family and their accomplishments.

Arrangements in the care of the St. George Funeral Home (755-3533) 26 Portage Street, St. George NB. Due to Covid-19 restrictions, there will be no visiting or funeral service. In lieu of flowers, donations to a charity of donor's choice would be appreciated by the family.