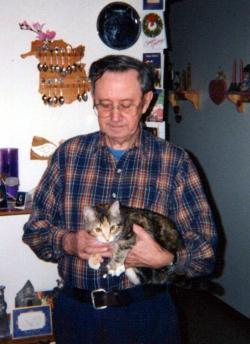 With heavy hearts we announce the passing of Mackenzie "Mack" Raymond King which occurred at the Saint John Regional Hospital, Saint John NB on March 30, 2021. Born in Pereaux NS on July 23, 1936, he was a son of the late Harden and Ruby (MacNutt) King. In addition to his loving wife, Doris (Bertin) King of Utopia NB, he is survived by two sons: Richard King and Thomas King both of Utopia NB; two grandchildren: Austin and Jannessa; sisters: Carolyn (Donnie) Holt and Shirley Ingalls both of St. George NB; several nieces, nephews and cousins. Besides his parents, Mack was predeceased by sisters: Jean, Gladys and Edith.

Prior to retirement, Mack worked for Connor's Brothers in Blacks Harbour. He loved fishing, watching movies and listening to classic country music.

Arrangements in the care of the St. George Funeral Home (755-3533) 26 Portage Street, St. George NB. At this time, there will be no visiting or funeral service. In lieu of flowers, donations to a charity of the donor's choice would be appreciated by the family.