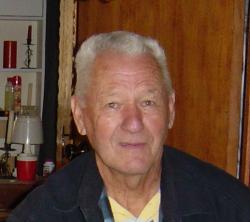 John (Jack) Raymond Frost, 86, of Second Falls, NB died peacefully at the Charlotte County Hospital on Saturday, September 19, 2020 with his family by his side.

Jack was a quiet, hard working man who loved to spend time with his family. He enjoyed many years at the camp during spring and fall, loved camping in the summer and always planted a large garden for the family to enjoy. Jack also liked to do a little partridge hunting in the fall while looking for fir tips for wreathe making.
Jack worked hard at many jobs through the years. In his early life, he worked at the St. George Pulp Mill, then lead his own crew cutting pulpwood. He belonged to the Operator’s Union while working at Coleson Cove, Pt. Lepreau and Mt. Pleasant. After working a few years for Connors Bros., Jack eventually retired from his position as snowplow wingman at the DOT. In between his regular jobs, he and his wife ran a grocery store, blueberry fields and a wreathe making business.

In keeping with his wishes, there will be no visitation. A graveside service will be held on Wednesday, September 23, 2020 at 2 pm at the Second Falls Baptist Cemetery. In his memory, donations may be made to a charity of the donor’s choice.