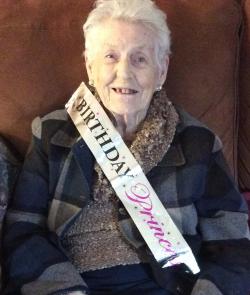 Margaret left St. George in her late teens to train as a nurse at the Royal Victoria Hospital in Montreal. She enjoyed her work as a private duty nurse caring for some of Montreal’s well-known families. She also cared for patient Russell George Haire whom she later married in 1950. Margaret and Russell loved their life in Montreal with their daughter Jennifer, their travels with their hunting dogs and their large garden. In 1978 they moved to St. George where Russell died in 1985. Margaret continued to live in her own home with daily assistance well into her 90’s. Her daily feeding of the crows and nightly feeding of the raccoons was of great concern to her caregivers who believed that the wildlife might decide to visit the kitchen. She spent her last 4 years at Ridgeview Manor in Pennfield where she delighted everyone and was the life of the party. At the age of 93 she still enjoyed cutting grass, taking daily walks up the Main Street to the Country Market and making her favourite stop at the Post Office.

Many thanks to the dedicated staff at Home Support, St Stephen, Extra Mural, Neurology Unit (especially Claudine) and Palliative Care (especially Deborah in the final hours) and of course the wonderful Ridgeview Manor.