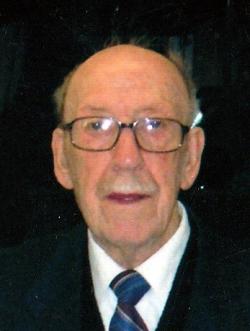 At Saint John Regional Hospital, Saint John NB on June 19, 2016, Rev. Peter Downie, husband of the late Isabella S. (McDonald) Downie of Saint John NB. Born in Glasgow, Scotland, on August 17, 1926, he was a son of the late Peter and Mary (Paterson) Downie. A loving father, grandfather and great-grandfather, he is survived by his children: Margaret (Gordon) Warren of Hazelbrook PE, Elizabeth Kneabone of Blacks Harbour NB, Gavin (Lynn) Downie of Admore AB and Catriona (Stephen) Lee of Cold Lake AB; eight grandchildren; four great grandchildren and several nieces and nephews. In addition to his parents, he was predeceased by his wife, Isabella.

Rev. Downie had once served in the British Army and recently celebrated over 50 years as a Baptist Minister. Having been relocated several times, he was active in churches in New Brunswick, Nova Scotia and Prince Edward Island. He truly loved people and enjoyed talking to whomever he met and lately Rev. Downie was often found enjoying the fellowship at Tim Hortons in the mall. In his quiet time, he enjoyed spending time with his family and friends.