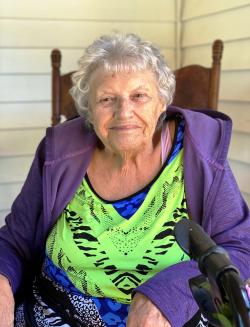 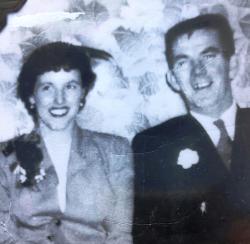 In Hilda’s words, that we discovered today in her 50th wedding anniversary keepsake book,

"We moved to Newfoundland in 1957 to a small isolated mine called Tilt Cove. From there we moved to Rambler. In 1967 we moved to the big town of Baie Verte so Kev could start school, the mine closed so we moved to Sudbury, Ontario, where we stayed 5 years. Then we headed north to Werner Lake, Ontario and stayed there 2 years. By then the lure of the North had got us and we were off to the big North Whitehorse, Yukon. It was quite an experience and we stayed 10 years. When the mine closed we were getting older and decided to head back to our roots so we settled for another mine and home in St. George New Brunswick."

Hilda had an adventurous spirit and made friends everywhere she went. Hilda was always up for a dance or a good game of cards. Family was everything to her. She was a mother and grandmother to all. She was everything that is beautiful. She was warm, kind, giving and selfless. She was love. And now she gets to be with the love of her life Malcolm again.

Our heartfelt thanks go out to Ridgeview Manor and all the caregivers that always showed her love and compassion. For that we will forever be grateful.

Arrangements in the care of the St. George Funeral Home (755-3533) 26 Portage Street, St. George NB. As keeping with Hilda's wishes, there will be no visiting or funeral service and she will be laid to rest with Malcolm in Loch Lomond, Cape Breton, NS at a later date. In Hilda's memory, donations to the NB Heart & Stroke Foundation or to the Kidney Foundation would be appreciated by the family.