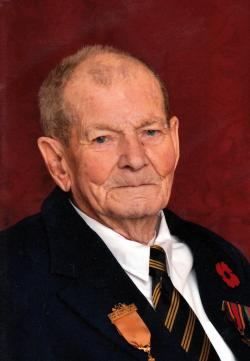 After a life well lived, James Walter Holly McLean of Ridgewood Veterans Wings, formerly of St. George, passed away peacefully on June 7, 2020. Jim was born in Rothesay on August 7, 1926 to Hugh Havelock McLean Jr and Katharine (Holly) McLean and attended Rothesay Collegiate School until 1944. He was married to his love, Anna Geraldine (Merrithew), for 61 years until her death on October 31, 2007.

During WWII, Jim served overseas on many different ships including the Brunswicker, Cornwallis, Ontario, and Haida. Upon completing his service, he was a member of the Royal Canadian Naval Volunteer Reserve in Halifax, where he and Anna resided. Following his service in the navy, Jim became a linesman and foreman with NB Power. The family lived in Gondola Point, Bathurst, St. George, Saint John, Fredericton & Rothesay. Upon retirement Jim & Anna moved back to St. George.

Jim loved to spend time with family, making people laugh and telling stories of the past. His favorite place was at the camp in Rollingdam, getting together with the boys and playing cards over drinks. In later years, you could often find Jim sitting on his porch waving to people passing by or on his lawn tractor mowing grass and visiting Wayne next door.

The family would like to thank the Ridgewood Veterans Wing for their compassionate care during Jim’s stay.

Arrangements in the care of the St. George Funeral Home (755-3533) 26 Portage Street, St. George NB. Due to the Covid-19 restrictions, private family services will be held. Interment will take place at the St. George Rural Cemetery. In lieu of flowers, donations to a charity of the donor's choice would be appreciated by the family.


While services for Jim will be private, the family would like to share with you memories of Jim. Please visit
https://youtu.be/YZjpn5BYrGA
Click here to View Condolences
Burial Location
St. George Rural Cemetery, St. George NB
Requested Charity
Donor's Choice