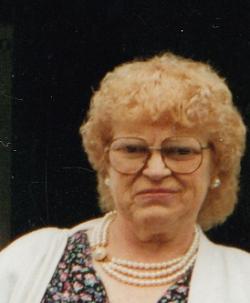 Unexpectedly at her residence at St. George NB on May 19, 2020, Ada Iona (Williston) Blanchard, wife of the late Melem Joseph Blanchard. Born at Miramichi NB on July 17, 1947, she was a daughter of the late Harvey and Annie R. (Taylor) Williston.

A loving mother, grandmother, sister and aunt, she is survived by her daughter; Brenda (Joe) Corning of Rollingdam NB, her son; Kevin (Kathy) Blanchard of St. Stephen NB, several grandchildren and great grandchildren, brothers; Mack and Dellas Williston both of Miramichi NB, sisters; Rita Blanchard of St. Andrews and Hilda Johnson of Miramichi as well as several nieces, nephews and cousins. In addition to her parents and husband, she was predeceased by her grandson Corey Campbell as well as six brothers and 2 sisters.

Prior to her retirement, Iona worked for Connors Brothers in Blacks Harbour for more than 25 years, mostly on the Baeders. She was a quiet person by nature who loved television, especially Judge Judy and Jerry Springer and cherished her visits from her children and grandchildren. She will be sadly missed.

Due to the ongoing Covid-19 pandemic there will be no visiting or service. A private family graveside service will be held at a later date. In Iona's memory, donations to the New Brunswick Heart and Stroke Foundation or a charity of the donors choice would be appreciated by the family.