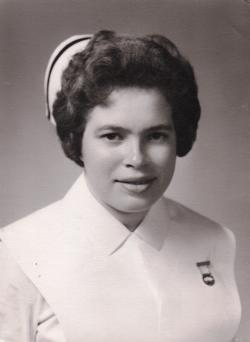 The passing of Donna Jean (Jarvis) Justason, wife of Neil A. Justason occurred at her residence in Pennfield NB on April 30, 2020. Born in Saint John NB on June 24, 1941, she was a daughter of the late George Willard and Estella Pearl (Radcliffe) Jarvis. A loving wife, mother, grandmother and sister, in addition to her husband Neil, she is survived by her children: Darlene (Harvey) Winters of Pennfield NB and Andrew (Kimberly) Justason of Canal NB; two grandchildren: Tara Justason of Pennfield and Shelby Winters (Matthew O'Toole) of St. Stephen NB; two sisters: Eleanor Vautour of Summerside PE and Sharon (Blair) Justason of Grand Bay-Westfield NB; as well as several nieces, nephews and cousins. Besides her parents, she was predeceased by one brother: Fred Jarvis.

Donna graduated high school in 1959 and went on to attend the Saint John General Hospital School of Nursing from where she graduated in 1963. She worked as a Registered Nurse for over 35 years, both in Saint John and at the Fundy Hospital in Blacks Harbour. Donna loved cooking and especially baking and was also an avid Bingo player. She was a member of the O.E.S. Granite Chapter #15 in St. George and will be missed greatly by those who knew her.

Arrangements in the care of the St. George Funeral Home (755-3533) 26 Portage Street, St. George NB. As keeping with Donna's wishes, there will be no visitation or funeral service. In her memory, donations to Charlotte County Cancer or the NB Heart & Stroke Foundation would be appreciated by the family.
www.stgeorgefh.ca
Click here to View Condolences
Requested Charity
Charlotte County Cancer or NB Heart & Stroke Foundation