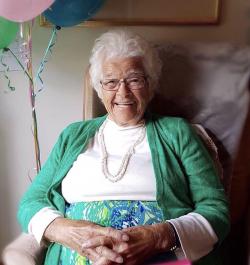 It is with sadness that we have to tell you that Gladys O. Boles quietly slipped away on April 4th, 2020 at Saint John Regional Hospital and went to join the others waiting with open arms and no social distancing in heaven. The first born, of the late DeLang and Catherine (Fraser) Hubbard, she arrived at Second Falls, NB on June 8th 1927. Although if you asked her, she would rarely tell you her birthdate and with a twinkle in her eye say that she was holding on to her 20’s.

In addition to her mother, father and husband Hazen Boles she was predeceased by her son Kenneth Boles, daughter Jane Kurtz, son-in-law Allen Kurtz, one brother Harry “Bud” Hubbard, five sisters Connie Kendall, Catherine Reynard, Betty Collett, Jean Cook, Irene Leslie, and step-sisters Gloria and Linda Hubbard as well as many other dear family and friends. They would have all been so happy to reunite with her, and the laughter around the kitchen table would have carried on into the night.

There is so much to say about a woman who loved God with all her heart and lived into her 90’s with very few complaints or ailments. She endured more grief in her lifetime than anyone should have to from an early age, but instead leaned on faith and rarely spoke ill of anyone or anything. She loved being outdoors and had a green thumb that could grow a stick. Gladys like many of her sisters were beautiful cooks and bakers, and nothing made her happier than a table so full that it had to be pulled into the middle of the kitchen. She loved church on Sunday, visiting with friends and family, spending time by the ocean particularly watching the ferry in Blacks, a good cup of tea, pretty dishes, going out for a lunch at the Birches, and “Go it while you’re young” when someone would comment on how she was always on the road.

It is with much love and gratitude that we give thanks to Jackie and the girls who cared for Gram like family at Ridgeview Manor since April 2018. In Grams words “It might not be home but I could never complain, they treat me so good”

We would also like to extend our sincere thanks to the staff of 5C North and South, along with Dr. Anderson and Dr. Horich, who cared for Gram when we weren’t allowed.

Donations would be appreciated in her memory to the Building Fund of Christ Church Pennfield, NB, St. George Food Bank or to a charity of the donors’ choice.